Brain Waves and their Usefulness

At Vielight, we are dedicated to developing devices that are helpful to improve brain functions. A large part of this relates to the use of photobiomodulation (PBM) to modulate brain waveforms. 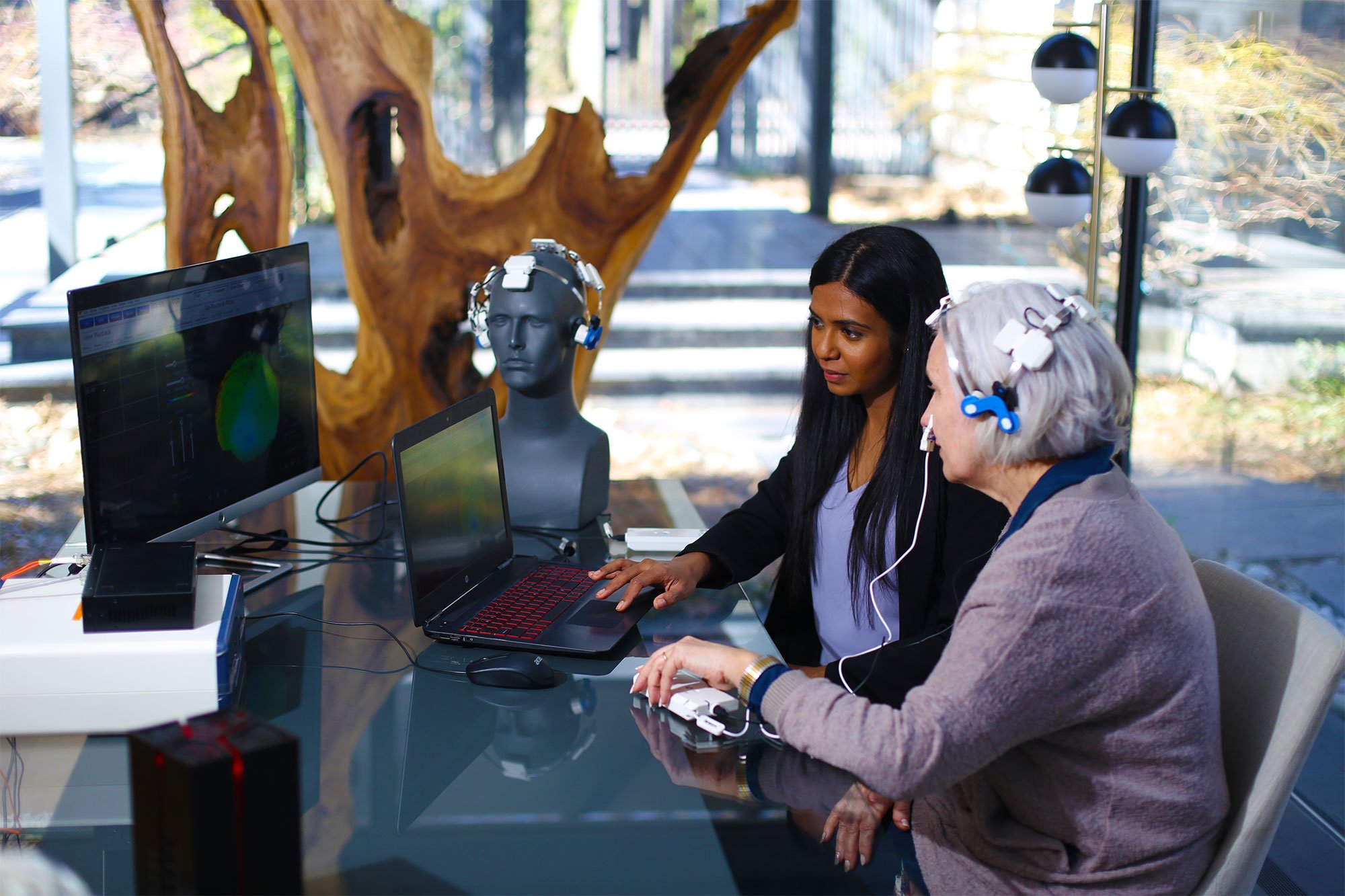 Neurofeedback training and the brain

Neurofeedback training is based the principle that the brain uses sensory inputs to learn. Repeated information patterns indicate to your brain how to best prioritize received information. They also teach the brain response strategies to help it to interact most effectively with its immediate environment.

Every brain state is associated with a particular band of brain frequencies, or rhythms. These rhythms are called “neural oscillations” because they are created by a multitude of neurons communicating with each other. These neural oscillations or brain waves can be registered and measured using an electroencephalogram, or EEG.

There is a correlation between a brain state and the type and frequency of neural oscillations produced during this state. It is possible that by stimulating a particular brain wave frequency, brain activity associated with this frequency can be modulated. Research shows that transcranial photobiomodulation (tPBM) can be effective in stimulating and modulating the brain

While brain PBM can start a restorative biochemical reaction in the neurons, it can also affect the brain’s natural oscillations. It can help to increase or decrease these oscillations, stimulating the brain to change its response. To achieve this goal, the light that is emitted during a tPBM session is pulsed at a specific frequency that is similar to natural brain oscillations. The choice of the pulse rate depends on the issue at hand and on the desired outcome.

A neurofeedback specialist uses equipment to map brain frequencies with qEEG, or quantitative electroencephalogram. Such frequency mapping can be helpful in assessing some deficiencies and abnormalities in the brain’s responses. Furthermore, the brain frequency mapping provides an image of brain oscillations and their respective frequency bands. These brain wave bands are defined differently by different contributors to the field. However, they are most commonly classified into the following five frequency band categories: delta, theta, alpha, beta, and gamma.

What are unique brain wave frequencies?

Delta frequencies fall in the range of around 0.1 Hz to 4 Hz, and constitute the lowest range of brain frequencies. Brain activity in this frequency range correlates with the states of deep sleep, along with some anomalous processes.

In addition to being present in stages 3 and 4 of sleep, delta frequencies are also commonly predominant in infants under one year. The delta waves are the slowest and have the highest amplitude. They help the brain to focus inwardly, while decreasing awareness of the outside environment. These waves are helpful in attaining a state of connection with the unconscious mind.

The inability to regulate delta wave activity impedes an individual’s ability to react fast to external stimuli. It can also be the cause of an inability to navigate the outside world with ease.

Brain oscillations in the theta waves frequency band fall between approximately 4 Hz and 8 Hz. The brain activity in this frequency range often correlates with creativity, emotions, and sensations. Theta brain frequencies are present during inwardly focused brain activity, as well as the transitional state between alertness and sleep. Theta oscillations are often prominent during states of creative activities, meditation, and spiritual contemplation.

Furthermore, activity in the theta range correlates with states of learning and memory creation and integration. It can also be present during anxious episodes.

In comparison with delta waves, theta waves are faster. However, despite representing faster brain activity, they are also present during sleep. Theta wave activity commonly correlates with distracted or dreamy states and experiences.

Brain oscillations in the alpha wave frequency band fall between approximately 8 Hz and 12 Hz. Alpha wave activity correlates with states that combine relaxation, alertness, and awareness. For example, the brain’s alpha wave activity is present during some stages of meditation. Alpha band activity is also associated with mental resourcefulness, while enhancing a general sense of relaxation.

During alpha wave activity, individuals can accomplish a variety of tasks more efficiently. Alpha brain oscillations promote a sense of calm, allowing the brain to prioritize and to focus better. They are also commonly present in normal adults and teenagers in relaxed states. Alpha wave activity also correlates with a state of alertness, but it is absent when the brain is performing specific tasks.

Furthermore, the brain’s alpha oscillations are present during relaxed learning and while applying knowledge. They occur in both classroom and work environments.

It is possible to increase your brain’s alpha activity by doing deep breathing exercises, or simply by closing your eyes. If you wish to lower your alpha state, you could try doing a complex task, like a mathematical calculation. Alpha wave activity promotes the ability to easily switch between tasks while increasing inner awareness, balance, and calmness. It correlates with faster brain activity than that of delta and theta brain waves. Faster brain wave activity refers to activities in the states of alertness and the execution of cognitive tasks. Slow brain wave activity is present during dream-like and meditative states.

Beta frequencies produce faster brain activity than alpha frequencies. Beta frequencies begin at about 13 Hz. This faster frequency occurs during a state of alertness and consciousness. If you are performing an analytical task with your eyes open, your brain’s beta oscillations are at work. This happens because communication among the neurons is increasing.

In general, when you are processing information about the world, beta wave activity is evident in the brain. This activity is present during various tasks ranging from mathematical problem solving to decision making.

High Beta Frequency Band — 18 Hz to 35 Hz
The high beta frequency range activity is associated with higher levels of alertness and even agitation.

The fastest of the five frequency bands is the gamma frequency. It is prominent when the brain is processing complex information that requires input from different parts of the brain. Intense thinking and problem solving are states that correlate with gamma wave activity. The brain oscillations in the gamma wave frequency band fall between approximately 35 Hz and 100 Hz.

Brain activity associated with a frequency of 40 Hz is of particular importance. The 40 Hz gamma wave activity is, presumably, present and needed for consolidation and complex processing of information from different parts of the brain. Whereas activity in this frequency range correlates with good memory performance, its deficiency correlates with learning issues and even disabilities.

Considering the importance of brain oscillations, Vielight offers several products that have been found to modulate brain waves using photobiomodulation. The Vielight Neuro Alpha device trains the brain for mainly alpha brain waveforms and improves basic brain network functions. The Neuro Gamma elevates the faster brain waves of beta and gamma, and downregulates the slower delta and theta waves. The new Vielight Neuro Pro device offers the versatility of delivering PBM in the range from 0 to 10,000 Hz.